Use Pact to test your code’s API

In IBM Garage Method, one of the Develop practices is contract-driven testing. Pact automates contract testing and enables it to be added to a continuous integration pipeline. The environment’s CI pipeline (Jenkins, Tekton, etc.) includes a Pact stage. Simply by building your app using the CI pipeline, your code’s contract gets tested, just open the Pact UI to browse the results.

What is contract testing

Contract testing is a testing discipline that ensures two applications (a consumer and a provider) have a shared understanding of the interactions or the contract between them.

The Pact framework has been selected for the provided tool set. Pact is a consumer-driven contract testing framework. More details can be found here - Pact overview. The framework has been built into the Starter Kits and a Pact Broker instance is provisioned in the cluster along with the other tools.

In the Pact framework, the contract is called a pact. A pact consists of one or more interactions. Each interaction has the following structure:

The following diagram gives an overview of the consumer interactions: 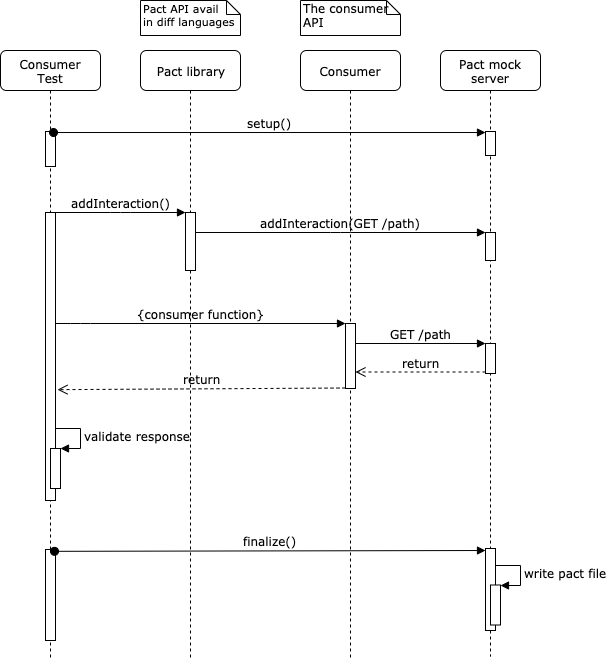 An example pact test on a Typescript consumer using the jest testing framework is provided below. It has been broken into several parts.

At the beginning of the test file, the pact server is configured and started in the beforeAll() block. The afterAll() block finalizes the pacts by writing them out to a file and stopping the pact server.

Next, an instance of the component that will be tested is loaded and configured with the pact server host and port as the base url used for the interactions. In this example, the consumer is using the typescript-ioc library to inject the baseUrl config value into the service.

Define and test the interaction

For each interaction with the provider, a test similar to the one provided below is created. In it, the Pact framework is used to define the interaction. The addInteraction() publishes the interaction to the Pact server so that it can be used to provide a mock response when the request is made.

The mock response is then used to validate the behavior of the component that is being tested. The example below is simple and passes the provider response directly through the service api but in more sophisticated examples the value would be transformed.

As an optional configuration for the verification process, an endpoint can be provided that handles the state information in the pact in order to ensure the preconditions for the test are met. (E.g. state=“given an empty database”). In order for these tests to be repeatable, it is often advisable to stand up a clean backend to run the pact tests when the tests start and tear it down when the tests are completed. For example, if a provider interacts with a Cloudant database point the test provider at a new database instance for the tests.

The following diagram shows the interactions for the pact provider: 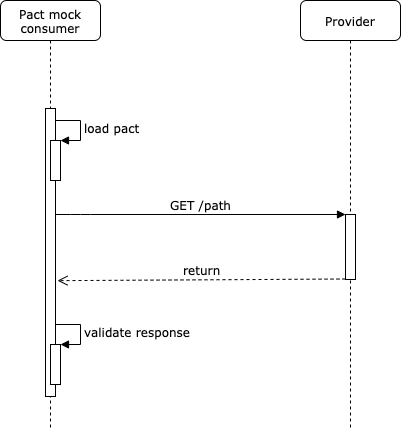 One of the underpinning requirements of the pact verification process is the ability to make the pact files generated by the consumer available to the provider. When the pact verification is run in an automated pipeline this is difficult without an intermediary. Within the Pact framework, the Pact Broker provides the facility for consumers and providers to share the pact definitions with minimal dependencies between the systems.

Additionally, the Pact Broker provides a place to define webhooks to trigger the provider build process when the pact definition changes and a way record and visualise the results of the verification process. The high-level interaction is shown below:

The Starter Kits have been built with the frameworks necessary to generate and publish pacts for api consumers and verify against pacts and publish the results for api providers. The pipelines will do all the publishing and verification against Pact Broker if an instance of Pact Broker has been configured within the cluster.