IBM Cloud Identity and Access Management (IAM) enables account owners to authenticate and authorize users to access resources. IAM can be complex; these best practices make IAM easier to use.

This tutorial teaches you best practices for using Identity and Access Management (IAM) in IBM Cloud.

This video presentation describes the IAM concepts, shows a demonstration, and includes a Q&A:

This article explains the concepts described in the video. You can access the presentation in the Office Hours folder in Box. The scripts discussed are available in GitHub.

Access control doesn’t change the features available in IBM Cloud. It does change who can use which features.

One approach to access control is to not use it. Just give everyone access to everything and trust that each user will only do what they should. This is a bit like a hotel where the room doors don’t have locks, but each guest is trusted to only enter their own room.

This article is about how to apply these limits in IBM Cloud. Here are two common scenarios for employing these limits: 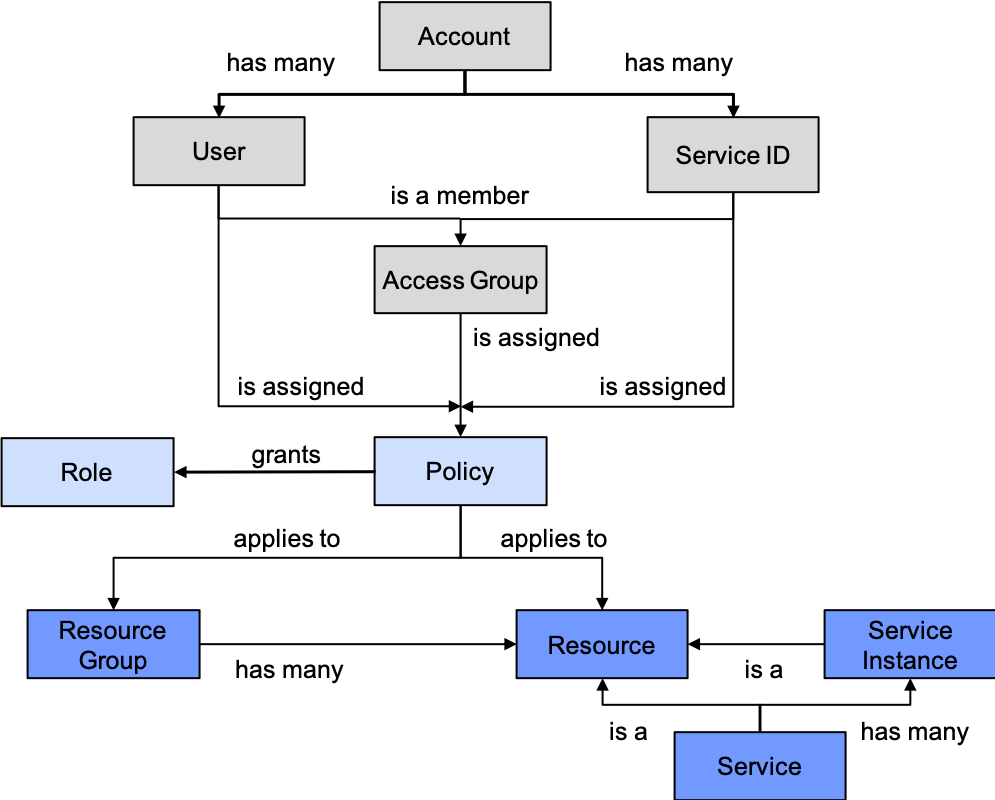 The most fundamental component type is a resource. To organize an account that will be shared by numerous users in various roles, two key aspects are:

The documentation explains some stratagies:

The IAM structure enables a lot of flexibility for very fine-grained access control. However, this broad range of capabilities can be complex to learn and is often more than many administrators need. This article will focus on the most important IAM components and best practices for how to use those.

This is a much simpler diagram of the main component types in IAM:

In words, this diagram says, “An access group uses policies to access the resources in a resource group.”

Here are the four main component types (three shown in the diagram) and their purposes:

This perspective — focusing on the main components instead of all of them — is the beginning of explaining best practices for using IAM. This does not focus on everything IAM can do or on what users must do or can’t do, but focuses on recommending what users should do to use IAM successfully.

What is a resource group?

This diagram illustrates one perspective for how to view IBM Cloud: It’s just a bunch of stuff running in the cloud. That stuff is resources, primarily clusters and the service instances bound to each one.

This model is correct but not sufficient. IBM Cloud is a multitenant environment, so different tenants own and use different resources. IBM Cloud needs to keep straight which resources are owned and used by which tenants.

This diagram illustrates the first level of resource organization in IBM Cloud: accounts. Each tenant has their own account. Each resource is created in exactly one account.

This diagram illustrates how resource groups can be used to organize resources by environment.

Each resource group contains the resources for an environment, whether that environment is single tenant for a single development team or multitenant for the teams that share an environment. A basic environment typically consists of a single Kubernetes or OpenShift cluster and the service instances bound to that cluster. This is everything needed to host an application, whether it’s a monolith or a set of microservices, or a set of applications being developed by the same team.

Once we have our resources organized into resource groups, one group per environment, we then need to organize how users access these resources. This is accomplished in IAM with a combination of access groups that organize users and policies that organize the roles with permissions for accessing resources.

An access group effectively serves the same purpose as an RBAC role. Users who will perform the same tasks and therefore need the same permissions should be grouped into the same access group. An added dimension, as we’ll see, is that permissions specify not only what actions the users can perform but also what resources the actions can be performed on.

The set of roles for a resource type is defined in IAM and cannot be changed by the user. Different resource types have different roles. Each role encapsulates a set of related permissions. For example, one of the permissions granted to users with the Administrator role on the Kubernetes Service resource type is containers-kubernetes.cluster.create, which enables the users to create clusters. Other roles grant cluster.read, cluster.operate, and cluster.update, but none of those can create and delete a cluster, they can only use an existing cluster.

The discussion above does not attempt to describe everything that IAM can do, but rather how to use IAM well to accomplish most tasks with low complexity. These guidelines follow a set of best practices. Some of the main ones are:

Best practices for assigning access has similar tips and some additional explanation.

Remember, the full component diagram for IAM is quite complex. The main set of components that you should use most of the time is much simpler.

As part of the Cloud Native Toolkit, we create a set of three access groups. This approach is pretty good for any account with multiple environments.

This diagram illustrates the three access groups and the relative scope of permissions they provide: 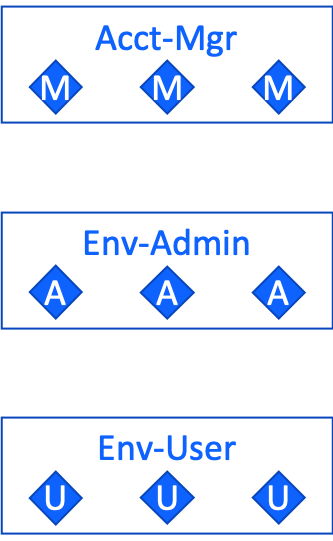 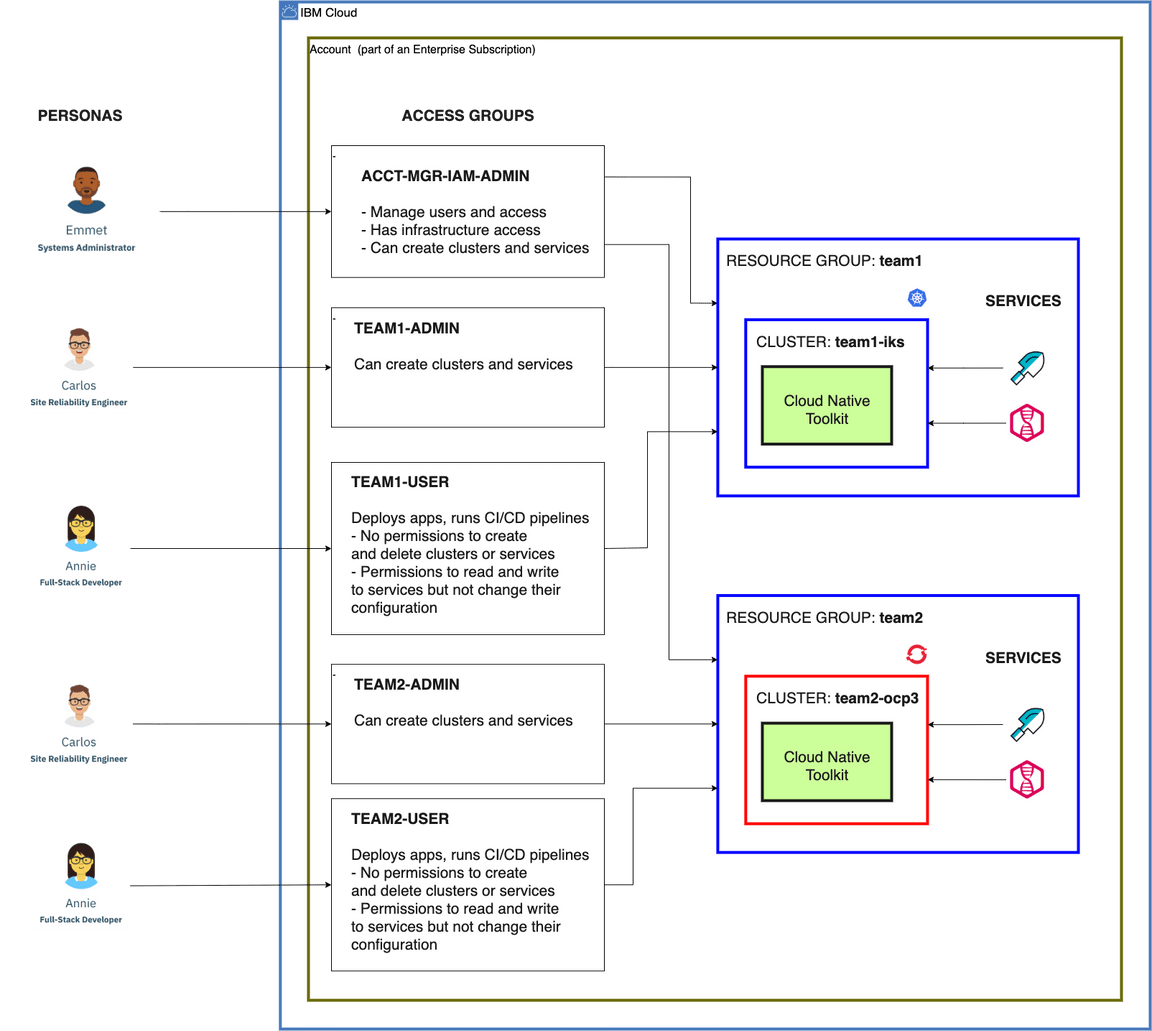 This video presentation shows how to perform this process: