Learn the architecture of the environment and the applications it supports

As explained in the overview, the environment consists of the following components and developer tools: 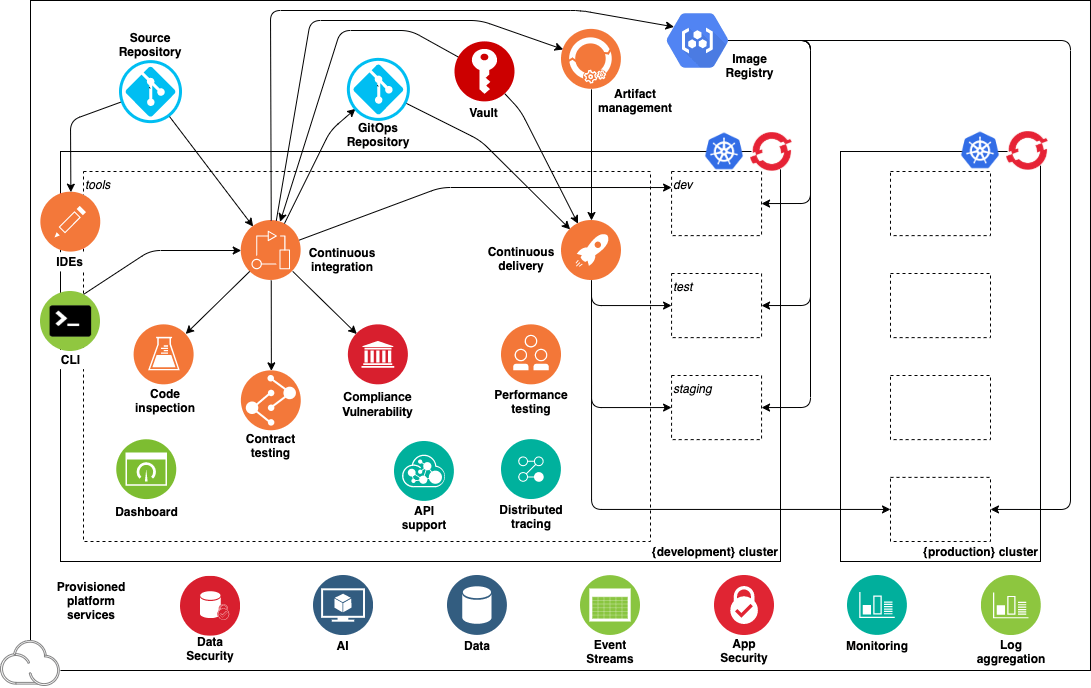 The diagram shows the components in the environment: the cluster, the deployment target environments, the cloud services, and the tools.

The developer tools implement the CI/CD pipeline for continuous delivery. They are deployed inside the development cluster in the tools namespace, which has several advantages.

The tools go where the environment goes. Because the developer tools and the pipeline they implement are hosted in the cluster, the pipeline can be installed wherever the environment can be installed—which is any Kubernetes or Red Hat OpenShift cluster. This is especially important for hybrid- and multi-cloud architectures where cloud environments are hosted on different platforms—IBM Cloud, AWS, Azure, on-prem, etc. The environment cannot depend on the CI/CD tools provided by a single platform, it needs tools that can be hosted on any platform.

Each team selects its own tools. Because the developer tools are installed separately in each environment, the development team that owns the environment can customize the tools and pipeline specifically for their project. All of the development teams in the enterprise don’t have to agree on a single set of tools and a single set of pipeline configurations. Each team can customize their toolset to meet the team’s preferences.

Each team manages its own tools. Because the developer tools are hosted inside the environment, the enterprise’s operation teams don’t have to be responsible for managing the tools. Each development team can manage its own tools running in its own environment. This is especially significant when various development teams select a wide range of tools. Normally operations would be responsible for managing all of the tools that any team wants to use, and would scope their responsibilities by limiting the tools teams can select. Now each team can decide which tools it wants to use, as long as they can be hosted in Kubernetes and the team is willing to pay for them and manage them.

The backend services provide capabilities the applications depend on, which will be needed in production. They should be provided by the platform, so this part of the environment is platform-specific. The production instances of these services will need to be managed by the enterprise’s operations teams. These services are an agreement, a point of coordination between the development team and the operations team. There are several aspects to this agreement.

Monitoring and management: Applications should be built to manage. This requires monitoring systems outside the application, applications designed for monitoring, and operations personnel who use the monitoring. The environment uses two of the primary monitoring services in the IBM Cloud service catalog: IBM Cloud Monitoring with Sysdig and IBM Log Analysis with LogDNA.

Data persistence: Cloud applications are stateless, but user functionality has data—that data must be stored somewhere. It should be stored and managed outside of the application so that the data survives application upgrades and outages. Applications typically have three types of data, and the environment incorporates IBM Cloud services for each one: Databases For PostgreSQL for legacy relational data, IBM Cloudant for document data, and Cloud Object Storage for binary data.

Security: Applications need to not only provide user functionality, but to do so securely. One important aspect of security is authenticating the users of the application. The environment provides this capability using IBM Cloud App ID.

Source code management (SCM): The application’s codebase should be stored in a code repository that provides revision control. (The Twelve-Factor App, Factor I. Codebase). The environment uses Git repos in GitHub, which provides webhooks to trigger the environment’s CI pipeline (either Tekton or Jenkins). While SCM is not needed in production and does not need to be managed by the operations team, it is an external capability that must be provided to the environment and that the development team must agree on (such as each development team having its own GitHub organization).

As Development Teams explains in detail, each development team can get its own environment, or multiple teams can share an environment. The tradeoff is each team getting an isolated development environment so that they can work independently from each other vs. sharing an environment to increase utilization and facilitate coordinating on assets that form a single application.